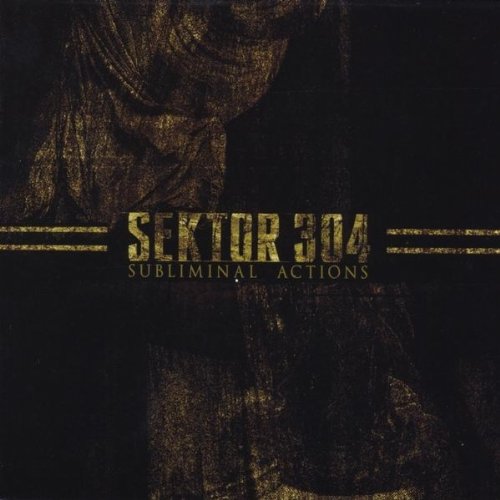 One interesting thing about Industrial music is that it comes in many different flavors. You have EBM, metal industrial and so forth. Then you have industrial noise. Sektor 304 lands somewhere in that area.. mostly.

“Subliminal Actions” is ten tracks of doom laden, ambient industrial noise. It’s an album that’s split into two parts. The first five tracks are more musical than the last five. “A Vessel of Guilt” has a steady tribal like pace with angry, screaming vocals laid on top. Sounds of whirring machines and clanking add to the atmosphere and rhythm. “By The Throat” is similar. It keeps an upbeat groove going with a tribal feel and angry, barking vocals interspersed. The track “Full Circle” takes on a heavier doom n’ gloom feel. Almost sounding like early Godflesh, it chugs along at a snails pace with a sluggish beat, various ambient noises and angry, spoken word vocals.

The second half of the album becomes much more ambient with it’s sound. Tracks like “Terminal Stage” is treated more as a journey through soundscapes. Starting with whirring noises and spoken vocals then transitioning into subtle machine like hums. “Concrete Islands” is more angry in approach filled with high pitch crashes and whirs with some guitar noise and grunts thrown in.

“Subliminal Actions” by Sektor 304 is very much an Industrial album. At first listen it might not seem that accessible. It’s one of those albums that the more time you listen to it, the more it grows on you. With subsequent listens you also begin to pick things apart and hear the various soundscapes, rhythms and noises. Overall “Subliminal Actions” will appeal to the noise industrial crowd but also could be an album of interest for the ambient crowd as well.