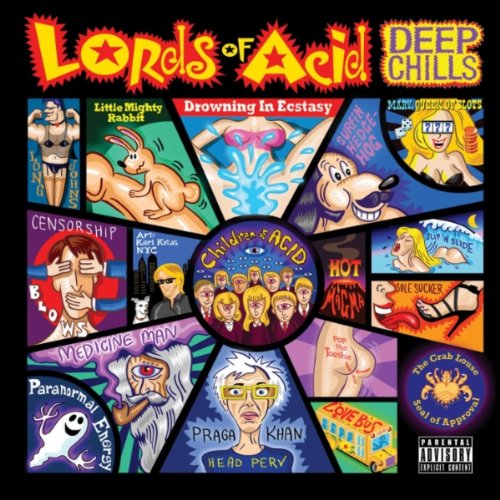 It’s been ten long years, but Lords of Acid are finally back. I’m not sure what Praga has been doing over the years, but it has not hindered his musical talents with Lords of Acid in the least. Deep Chills has the tone and the feel of a Lords of Acid album, but it also throws in some nice twists and differences to mix things up.

I won’t cover the tracks we already covered when the “Little Mighty Rabbit” EP was released. You can read about those tracks in our review. This time around I want to focus on the rest of “Deep Chills“. It’s an album that finds, in my opinion, Lords of Acid switching gears a few times while still able to hold on to a cohesive Lords of Acid feel amongst all the tracks.

For starters we’ll take tracks “Long Johns” and “Pop That Tooshie“. These two tracks are closer to your “typical” Lords of Acid tunes. They are both filled with digital noises and dance beats with some techno-rock grooves. Perfect for the clubs.

With “Love Bus“, “Children of Acid” and “Censorhip Blows” Praga and gang switch gears some. We get more of a techno-industrial treat. “Children of Acid” is heavy on aggressive, electronic beats and tones with some subtle guitar samples thrown in. It almost has an “ultra heavy beat” vibe. Yeah, I’m saying it could be on a split single with a KMFDM track and fit right in. Same goes for “Censorship Blows“. While “Love Bus” has more of a techno-rock vibe with a nice fast pace, bouncy beats and electronic tones. Of course DJ Mea’s sultry vocals enhance everything.

“Hot Magma” and “Paranormal Energy” change things up once again. “Hot Magma” slows things down and even gets a little creepy. It’s a slower, industrial track with an electronic soundscape feel. Gone are the fast bouncy beats with a more slow groove taking it’s place. “Paranormal Energy” is another one that slows things down. However with it we get a more dance, hip-hop vibe. It’s a slow groove with some fast paced rock vibes thrown in at times.

There are two standout tracks that at first listen don’t feel like they fit with the rest of the album. After a couple of listens though you can hear how they too still work as Lords of Acid tracks and are still at home on “Deep Chills“. First of these standout tracks is “Slip N Slide“. It has almost a 50’s rock rhythm to it, but still with an electronic industrial edge. And of course lyrically it’s all about sex in true Lords of Acid fashion.

The other standout track is “Surfin’ Hedgehog“. This guy is one catchy track. As the name itself implies, the track has an industrial, California surfer vibe to it. It’s a very catchy and bouncy tune. The chorus will easily get stuck in that noggin of yours and you will be bouncing your head in rhythm with the beat. It’s also a humorous song and a nice twist for Lords of Acid. I think the Hedgehog will enjoy it.

“Deep Chills” is a Lords of Acid album that I think will appeal to old fans and draw in some new ones. It has a little bit of everything from industrial-rock to groove oriented tracks and a few tracks that are just catchy as hell. It’s an excellent album and I’m looking forward to more Lords of Acid albums in this manner. Just please don’t make us wait another ten years Praga.