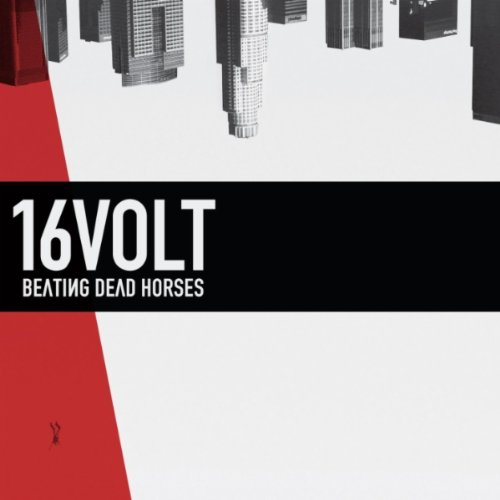 Eric Powell and Mike Peoples have done it yet again. Beating Dead Horses is definitely 16Volt. Their signature sound is found throughout this album. Some may find that a great thing, others may be disappointed 16Volt isn’t “evolving.” To me, Beating Dead Horses keeps true to 16Volt and still adds a few things.

Beating Dead Horses drops most of the dance style beats 16Volt would incorporate on previous albums. This time around there are more sludge like guitars and slower, heavy beats. The title track “Beating Dead Horses” is a catchy, sludgy guitar driven tune. It has some nice hooks that work to add to the rhythm. It also drops the low, whisper vocals for more aggressive upfront singing. “The Wasteland That Is Me” is similar with distorted guitars, a driving beat and electronic noise. Vocals shift back to the more distorted, whisper talk that 16Volt is known for.

“Fight or Flight” is one of the more disappointing songs. I’m not sure if they are trying to move towards a more main stream sound, but to me this song sounds more like a Static-X song. Almost exactly like a Static-X song. It is fast paced with some low, sludge guitars. Vocals are fast and screaming complete with chaotic, choppy (yet rhythmic) breaks mixed in. Even the vocal style sounds exactly like Wayne Static. There’s a few electronic background noises thrown in but they don’t add much to the song.

On the flip side, my favorite track on the album is “Veins.” They incorporate heavy, distorted guitars with some sludge and a little electronic edge to it. Their whisper like and screaming vocals are in full force on this track. The chorus and beats are rhythmic and catchy. You’ll be bouncing your head to it. The track “Sick Sick Sick” is similar. With it’s fast pace, it incorporates some speedy guitar hooks, screaming vocals and a steady heavy beat. The track makes you stomp your feet.

I could see some trying to argue that with Beating Dead Horses, 16Volt is pushing to appeal to a more mainstream metal audience. That is one argument, but not one I agree with. 16Volt has stayed mostly true to form with Beating Dead Horses, moving away some from the more electro-Industrial sound and throwing in a bit more speed and sludge. For me that is perfectly fine.