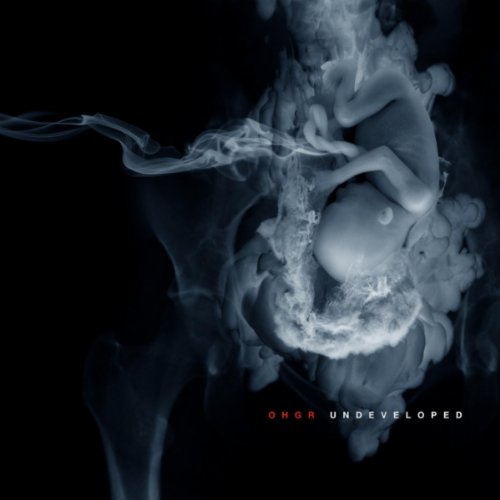 OhGr has made some shifts over the years in their sound as they’ve released their music. Their latest release Undeveloped progresses even more, continuing with a sound the band started with their prior release, Devils In My Details.

With Undeveloped, OhGr has moved away from the more fast dance like beats and electronic chaos found within their albums Welt or Sunnypsyop. Undeveloped is slower, more ambient, dark and moody. The electronic beats are not dropped, just used differently and less frequently than prior albums.

The first full track on the album, “101”, does have a nice dance beat combined with electronic noise rhythms. The vocals are harsh and aggressive. The song feels reminiscent of Skinny Puppy’s ‘Assimilate‘. The next track, “Crash“, keeps up the electronic dance like beats adding some nice guitar riffs that sit up front. Ogre does the lightning fast vocals thing in spots like on previous albums. Towards the end the song switches gears and is simply gunshot sounds and Ogre’s haunting vocals. The song also has a nice intro prior to it that is the actual 911 call from Michael Jackson’s death.

The track “Comedown” is more like older ohGr songs. It has a fast beat, swirling background noises and the electronically distorted rhythmic vocals ohGr is know for. The song “Bellew” is something different however. Running with a much slower pace, Ogre’s vocals are softer, more balanced and less distorted. The song has a lot of synthesized trance like sounds buried within the beat. “Hollow” is similar with an un-ohGr like trance sounds buried within the electronic beat. Ogre’s vocals are more aggressive and harsh than with “Bellew“.

The thing I find interesting with ohGr is their ability to make the vocals so integral to the music. The vocals add much of the rhythm of the songs and create the interest for each track. Nivek Ogre has a great ability to be aggressive and harsh or soft and melodic with his vocal work. This adds a lot to Undeveloped in making it a solid album. If you are a fan of Skinny Puppy or ohGr’s previous albums you will not be disappointed with Undeveloped.