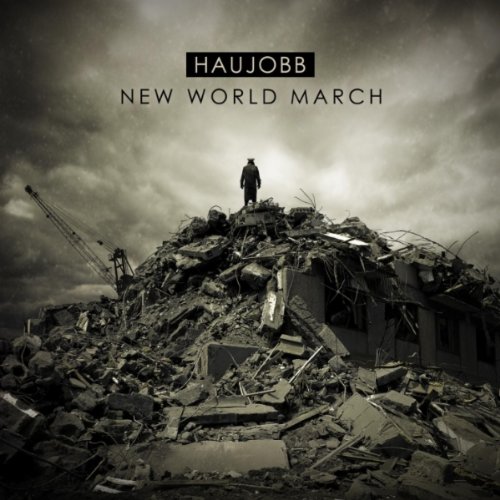 The end of the world is not new subject matter for Industrial and Metal bands. Bands like Front Line Assembly and 32Crash have covered the territory before. With New World March, though, Haujobb has created more of a post apocalypse musical score than just an album about the destruction of everything.

I will admit, New World March had to grow on me. I reviewed the single Dead Market not too long ago. That song is a great mix of interesting digital noise, rhythms and beats. It’s also, to my ears, the heaviest and most rhythmic song on New World March. After a few listens though the other songs on the album started to grab hold, just in a different way.

Tracks like Lost and Echo play more like electronic musical scores. They are filled with great atmospheric sounds, haunting vocals and a slow pace. Echo could easily be included in a movie like Aliens or Blade Runner. Let’s Drop Bombs and Machine Drum still contain ambient digital noise, but mix in slightly heavier beats and synth sound. Next to Dead Market, Let’s Drop Bombs is one of the faster paced and heavier tracks. More Than Us and New World March stay within a similar synth sound and beat as Machine Drum but have a touch more of an 80’s synth feel to them. The song New World March is a slow build mix of odd synth sounds, almost with a Gary Neuman feel, that build into some steady and faster beats.

New World March also comes with a second disc full of remixes. The remixes vary widely and give a very different feel to each of the tracks on the album. Dead Market is laced with an upbeat, almost tribal feel whereas Echo is turned into a more typical electro-noise number. Overall the remixes are cool and interesting, but I prefer the original versions.