Review: Mona Mur / En Esch – Do With Me What You Want

Mona Mur / En Esch – Do With Me What You Want
Released: September 13th, 2011
Label: Artoffact Records 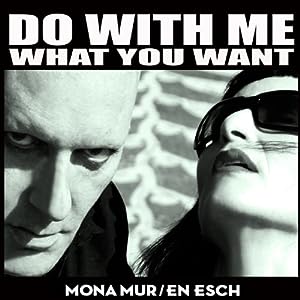 What happens when you combine a sound engineer/musician and a German Industrial Music pioneer? Well… you get Mona Mur & En Esch. Collaborating for the second time on “Do With Me What You Want“, the two vocalists have put together a seductively dark, slow groove album.

The album is dominated by slow and mid tempo beats. You won’t find any heavy, tear-your-face-off industrial noise with this album. Do With Me What You Want is all about being groovy, sultry and seductive. Most of that thanks to the sexy vocal work of Mona Mur, but En Esch adds his signature deep, seductive growl to the mix as well.

Tracks like “Touch” and “Guilty” are dominated by Mona Mur’s sultry vocals and a slow, rhythmic sound. En Esch’s deep growl adds a nice balance to Mur’s softness. “Part Again” is another slow groove track with the inclusion of some nice digital beats and En Esch’s guitar work.

The track “Do With Me What You Want” switches gears and is a bit faster than most of the other tracks. It’s filled with some steady beats, plenty of En Esch’s throaty vocals and digital background blips and noises. The track feels close to being a Slick Idiot song. “Justice” also kicks the tempo up a notch. It has a nice steady beat interlaced with En Esch and Mur trading vocal attacks and a few horn instruments thrown in.

A special track on the album is “Easy Living.” Yes, Mona Mur and En Esch created a dark, slow groovy cover of a Uriah Heep song. They definitely made the song their own by slowing it way down, put in some nice beats and let Mona Mur’s vocals dominate. It’s a Uriah Heep song turned sexy.

En Esch and Mona Mur have put together an industrial album that is different and works very well. Filled with sultry vocals and slow groove beats “Do With Me What You Want” seduces you, gets into your head and makes you pay attention to it.