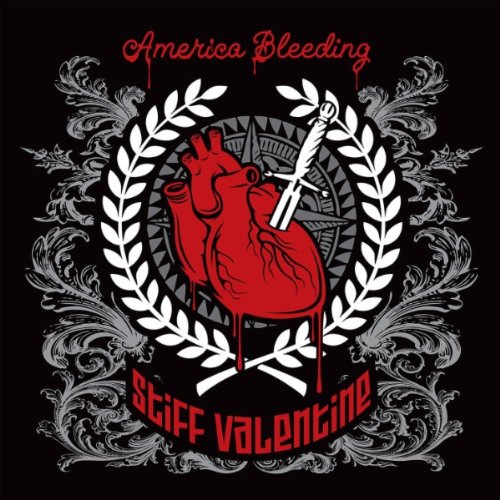 If you’re getting tired of the EBM club thumping Industrial music out there or crave some aggressive Industrial-Metal music, then America Bleeding might be what you are looking for.

Led by Chris DeMarcus, Stiff Valentine’s America Bleeding hits you with chugging guitars, pounding drums and aggressive angry vocals. It is a metal induced zombie nightmare (album lyrics are about a zombie America).

America Bleeding is one of those albums I had to listen to a few times before it grew on me. At first I didn’t care much for it. Upon first listen I felt it suffered from a lack of cohesion between the songs. Upon further listenings, I started to get a feel for the album. While the songs as a whole album work together, each song differs enough from the others that the album does seem slightly disjointed. Tracks like “Good Enough 42” and “Starve” have a heavy groove rock sound. The vocals are clean and more talking than singing (with some aggression thrown in). Where as tracks like “Disconnect” and “Biohazard” go all out aggressive. They have chugging guitars, use some sampling, and have angry vocals. The sound of these two remind me of White Zombie in overall feel. “Pit Boss”, on the other hand, has a fast paced punk like vibe to it.

The final track on the album, “Collide“, is very much the odd man out (but a great track). It is all about ambient digital sounds with some soft vocals and chugging guitar loops. It feels very much like a Delerium or Front Line Assembly song. Which might make some sense since Chris Peterson produced the album and several Front Line Assembly players took part in making America Bleeding. It’s just an odd finish compared to all the other heavy and aggressive tracks.

One disappointing thing about the album is that no single track really grabbed me. One thing I try to do with all the albums I review is play it while doing other boring work things. Often certain tracks will grab me and force me to pay attention to it. None of the tracks on America Bleeding really did that other than “Collide” because it was so different from the others.

With Stiff Valentine, Chris DeMarcus has gathered some strong players in Industrial music and has put together a solid album with America Bleeding. While no tracks on it rip out your jugular like a brain drunk zombie, it’s a decent album to add to your Industrial music collection.