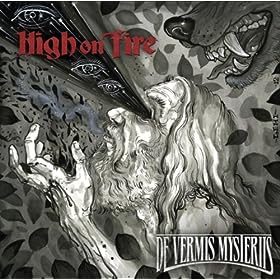 High on Fire is one of those bands that you don’t just listen to. They are just as much a force as they are a band. Much like their previous albums, De Vermis Mysteriis is very much High On Fire true to form. It is fast. It pummels. It will beat your brain silly and it is great.

Tracks like “Bloody Knuckles” and “De Vermis Mysteriis” have the usual High On Fire sound from previous albums. Pike’s throaty growls resonate, the pummeling drums hammer away with their battle rhythms and the guitars chug along. “Fertile Green” and “Serums of Liao” move along in a similar fashion with fast, tribal-esque drums and high speed guitar crunching. “Madness of An Architect” and “Warhorn” slow things down. They become sludgy tunes with Pike’s gruff vocals/screams (too much gravel and whisky in his diet?), sluggish rhythmic drumming and crunchy guitars.

“Interlude” does change things up. It is a sluggish instrumental tune, dropping the pounding drums and screaming vocals. Instead High On Fire fill the space with some hypnotic bass lines, squealing guitar leads and mellow drums.

High On Fire is one of the few bands that are the essence of “heavy” music. Yet at the same time they manage to incorporate so much rhythm into the music that you become mesmerized. You aren’t just hit with a wall of sludge and noise. They pull you into the musical chaos right along with them. They’ve done this on all their albums (not a bad one yet) and De Vermis Mysteriis is no different. If you like High on Fire, De Vermis Mysteriis will not disappoint.