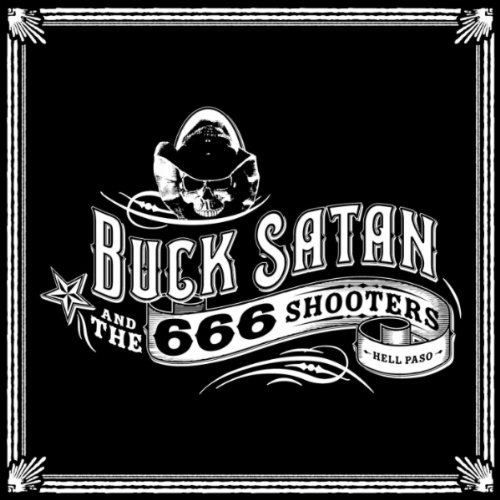 Buck Satan and the 666 Shooters‘ album has FINALLY seen the light of day. It’s amusing to me, rummaging through some of the blog posts online, how some talk about Buck Satan being this new concept from the master of Industrial music Al Jourgensen. When really the concept has been floating around Jourgensen for a very long time.

Back in the day, the Buck Satan album idea was going to be Al and crew teaming up with his country heroes like Buck Owens and other Bakersfield country sounding artists. Sadly that version of a Buck Satan album never happened. I guess the death of Buck Owens was enough of a kick though to get Jourgensen to finally put some music down as Buck Satan and The 666 Shooters (Owens even gave Al his blessing) and now we have “Bikers Welcome! Ladies Drink For Free“.

I am not a country music fan. Especially “modern” country. I do however enjoy the old country greats like Johnny Cash and Hank Williams Sr. That said, I was fully prepared to not like this album. I can’t really explain why, but I was skeptical. After about a minute of the first track my concerns were gone. Buck Satan and the 666 Shooters, “Bikers Welcome! Ladies Drink For Free” is what I would call Al Jourgensen’s interpretation of a country music album. This is not a recreation of that classic Bakersfield sound. No, it’s more like a bastard son born out of a one night stand between industrial metal and Bakersfield country music.

Songs like “Medication Nation” pound along with rhythms that hook and nice guitar leads while Al sings about a familiar subject to him, drugs. The chorus and rhythm will easily get stuck in your head. Sticking with the drug theme, the song “Quicker Than Liquor” about how drinking isn’t the fastest way to off yourself, all done with a fast beat and country twang.

Al and crew do take on a couple covers on the album. They put together a version of The Grateful Dead’s “Friend of The Devil” and the Gramm Parson penned song “Drug Store Truck Drivin’ Man“. Both songs are played much faster than the original versions and both work well. With the song “Sleepless Nights and Bar Room Fights” Al and crew go for balls out speed. This is a song filled with lightning fast fiddles, crazy leads by Mike Scaccia and thumping beats. The country music dancers out there would have a hell of a time keeping up with this track. My favorite track on the album, “Down The Drain” continues the lighting speed treatment with an insanely fast beat, speed fueled guitars and Al screaming very much like he does in Ministry. This is one aggressive country tune and it rocks.

One slight complaint I do have with the album are the vocal treatments Al did on a few of the tracks. In an attempt to put some country into the music , Al pushes his vocals into a high pitched twang. Even working in a slight hillbillyish “accent”. It works most of the time, but does get to be a bit much on a couple tracks.

Put simply though, “Bikers Welcome! Ladies Drink For Free” is a head charged and fast paced metal-country album. If you are a fan of Al’s band Ministry (and appreciate old country), you will enjoy “Bikers Welcome! Ladies Drink For Free”. In a nice change of pace from Ministry, the songs are still fast but much more layered and the metal-country sound Al and crew created on the album works.