Review: Rammstein – Made In Germany 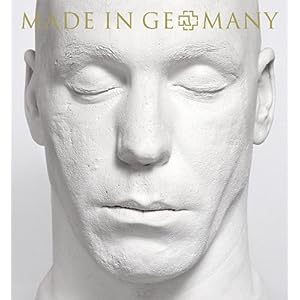 Best of, greatest hits, retrospective; I’ve never really been much of a fan of the “greatest hits” albums that inevitably come out with successful bands. They usually just rehash the same popular songs that have been played to death. With Rammstein however, well, you really can’t say that.

I remember the very first time I heard Rammstein. It was a small clip of “Hierate Mich” during the 1997 film “Lost Highway” by David Lynch. Rammstein had two songs on the soundtrack. As soon as I heard the guttural vocals and pounding guitars I knew I had to find more music by them. Ever since then I have been hooked, owning every album they have released.

Sixteen years later, Rammstein is still just as relevant and still just as awesome as back then. If you own every album Rammstein has released or only listen occasionally, “Made In Germany” is a good album to have. With sixteen songs, one of which is a new one called “Mein Land“, “Made In Germany” is a great retrospective of what Rammstein has created musically over the years. It illustrates just how Rammstein has grown over the years without losing their sound. There is not a bad song in the mix (just check out the track listing below).

If you pick up the deluxe version of “Made In Germany” you also get a bonus disc of eleven remixes. There are remixes by Junkie XL, Laibach, Pet Shop Boys and others. Most of the remixes are interesting to listen to but none of them really punched me in the face as I had hoped.

If you’re new to Rammstein or don’t own all the albums and just want “the good stuff”, then definitely pick up “Made In Germany“. Even if you are a loyal fan, “Made In Germany” makes for a good mix in the Rammstein collection.