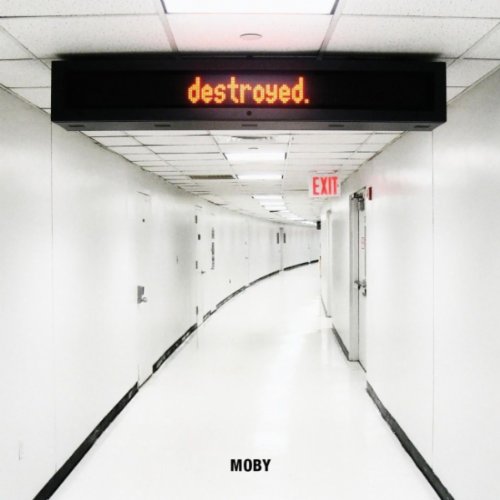 I’ve been listening to Moby since he dropped his first record, Moby, in 1992. I’ve also seen him perform a couple times and it’s always such a shock because he’s so energetic. Who’d think it?! Sometimes you get a sense of that energy from his music and sometimes you don’t. With Destroyed, I definitely don’t. I prefer him in dance or pop mode over ambient mode. It’s not that I don’t like ambient, but I’d rather listen to Air when I’m in that mood. Plus, let’s face it – everyone is holding him up to his classic, Play. Sorry to disappoint. Yet the thing is, when Moby is good, he’s very good.

The best track, hands down, is “The Right Thing”. The vocals are done by Inyang Bassey. She has a SEXY-ass voice! Her throaty, smoky singing over some smooth grooving by Moby works perfectly. If the rest of the record was this good, he’d have another winner on his hands. It’s got kind of a vibe like Blur’s This Is Hardcore. Yum!

His first single, “The Day“, is mostly 80s synth pop – somewhere between The The and some Peter Murphy. It’s fine. It’s one of the better tracks, but it’s still not great.

Some of these other songs sound rehashed to me, like I’ve heard it all before from him in some variation or another. I’m all for taking a journey in sound if it’s interesting, complex, unexpected and melodic. With Destroyed, sometimes I feel like the Casio is on repeat, you know?

My general feeling is that this is mostly a lethargic record. It’s not bad, but it’s just…bland and kind of boring. I believe Moby when he says some of this was written in a hotel room in Spain at the break of dawn. If I was in the same circumstance and gave it another listen, it would probably really work for me. The rest of the time, it’s kind of a yawner.