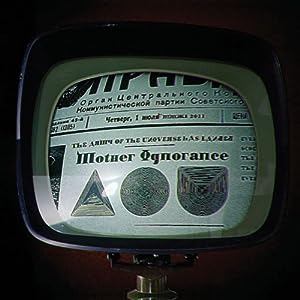 When I first started playing Army of the Universe – Mother Ignorance, I was only going to listen to a few tracks at first and then stop. I had work things to do that I needed to concentrate on. Those few tracks turned into me listening to the whole album in the first sitting.

Hailing from Milan, Italy, the duo recorded in the latter half of 2010 with Chris Vrenna (Nine Inch Nails, Marilyn Manson). Mother Ignorance has the talent and just enough polish to give it a great sound. It is an excellent mix of electronic, dance noise and beats combined with rock guitars and heavy bass lines. The vocals mingle well with the mix. They never overpower, have a certain smoothness and seduce you into the music.

Unlike some Electro-Industrial/EBM music, Mother Ignorance never gets redundant and boring. Songs like “Lovedead” layout some nice electronic beats and hums, with some upfront lead guitar grooves. The vocals stay as part of the music, adding some nice hooks and rhythms. “8 Flowers” continues the trend with vocals that add rhythm and hook with the music but add a bit more force during the chorus. The music has some nice heavy guitar hooks and electronic beats embedded with digital noise. One excellent part of the song entails a vocal scream smoothly transitioning into a pulsing digital signal. Very nice.

The song “Retarded” changes things up a bit. It moves the heavier guitars up front and adds more harmony and scream like vocals. “Table in Hell” reminds me a little of the band Hellbent. It has a slow groove, dance like feel with smooth vocals over a repeating digital beat. It almost reaches an electro-trance feel. The song “Slower” changes things again, laying on the digital noises thick and then burying the vocals and dance beats within that.

With Mother Ignorance, Army of the Universe has created an excellent album. It combines two genres of music very well. They change things up enough that it never get stale or boring. The music has enough hooks and rhythmic beats to keep you listening several times over without losing interest in the album. If you dig bands like Gravity Kills, NIN or Hellbent, check out Army of the Universe.

We’re giving away Army of the Universe music. Check out how to win a “Lovedead” EP on vinyl.

2 Responses to “Review: Army of the Universe – Mother Ignorance”