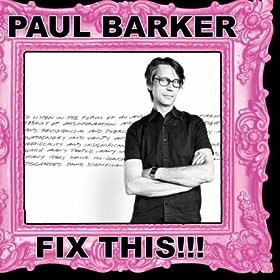 If you are a fan of good ‘ol industrial music and feel industrial music just isn’t like it used to be, then you are in luck. You need to head on over and buy Paul Barker’s new album “Fix This!!!“. No, seriously do it NOW… and then listen to it while reading this review. DO IT! We’ll wait.

Ministry fans know that the core of that band was Paul Barker and Al Jourgensen. As the years went on, Ministry became more of a metal band and well, Paul Barker left. Al has continued to make music as Ministry but it is pretty much just thrash metal these days. A sound many industrial fans just don’t care for. Where as Paul Barker has gone on to create some great industrial music with his bands Flowering Blight, USSA (with Duane Denison of Jesus Lizard) and now he has released “Fix This!!!“. It only takes about three seconds listening to any of these acts to know that Paul Barker is carrying on the industrial sound and filling that void left by Ministry turning thrash.

“Fix This!!!” is eleven tracks of industrial music goodness with an excellent selection of guest vocalists such as Nivek Ogre, Taylor Momsen and Chris Connelly. The opening track “Victory” is a heavy industrial piece that feels more like an old school Ministry tune. Taylor Momsen provides a powerful, harsh voice to the industrial beats and wailing guitars. The track “Self-Inflicted Blight” also keeps things on the heavy side with five minutes of pounding drum beats, aggressive, distorted vocals and loud chunky guitars.

“reSpite” is another excellent track featuring Nivek Ogre (ohGr, Skinny Puppy) on vocals. The song has a similar feel to Ogre’s sound on his Rx album “Bedside Toxicology” (Mark Walk was also involved). Ogre’s creepy yet melodic vocals are overlaid on top of sluggish beats, digital noise and crunching guitars. When asked about working with Ogre again, Barker had this fantastic reply:

“I talked to Ogre about this fresh idea I had; make a generic thrash metal record and sing about current lame political woes using sesame street lyrics, but I still have all my teeth and wanted songs with a little more bite than that.” Ouch. But funny.

He goes on to say, “After many hilarious phone calls a deal was struck: I write the music and he writes and sings the lyrics. So I sent Ogre a rough song I wrote. Unfortunately, our schedules didn’t allow us to track together, so he and Mark Walk sent me finished vocals and I finished the mix. Not nearly as much fun as being together in the studio, but fun nonetheless. All 1’s and 0’s- very modern.”

So you have purchased it by now… right? There are plenty of other excellent tracks on “Fix This!!!” (not a bad song in the bunch). But if you haven’t purchased yet, I’ll leave you with this. Paul Barker is an industrial music legend and icon. If you are an industrial-rock fan (and maybe miss that old school Ministry sound), Paul Barker’s “Fix This!!! (and ALL his other projects) will most certainly fill the void. You will enjoy every minute of the album. “Fix This!!!” is well worth a purchase.